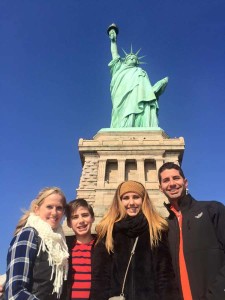 Raise your hand if you remember watching Roots. Or Selma. Or Straight Out Of Compton.

Keep your hand raised if you are a white person who felt some shame and even a little bit of guilt as you left the theater for what racist white people did in those films.

I wanted to pull a Jerry Maguire and run around hugging everyone while announcing “I love black people!” Just to make sure nobody thought any of those bigots in the movie represented me.

I get the feeling that the Muslim taxi driver who picked us up from the National September 11 Memorial Museum in New York City probably felt the same way.

The museum is not for the faint of heart. It’s a 3 hour self-guided tour of heartbreak. It features relics of that day. The luggage of one of the hijackers, pieces of airplanes, twisted metal, shoes, eyeglasses, firefighter hats and pictures.

Tons and tons of pictures.

All of the bad guys who caused this tragedy were Muslim extremist. I studied their vacant expressions in the pics of them featured in the museum. It was easy to start allowing ugly thoughts about Muslims to build up inside my mind as I continued through the exhibits. We stood and watched the surveillance footage of the hijackers casually checking out of their hotel on the morning of Sept 11th then heading to the airport with mass murder on their daily agendas.

It’s hard for any sane person to fathom their rationale.

Also, I’ll admit that prior to arriving in NYC for the Thanksgiving weekend with my family I had to take a Xanax before boarding the plane. It was just a few days after the Paris attacks. The terrorism risk was raised to high for air travel.

So my pre-anxiety due to current world events coupled with my raw emotions from touring the museum had me slightly on edge.

When we walked out of the museum heading to dinner the cab that my husband hailed just so happened to be driven by a Muslim man. I immediately recognized that to feel anything ill towards this young man, as though he had done anything wrong, was discrimination and unfair to him, but I felt slightly uneasy despite the logic.

I watchfully climbed into his car.

Traffic was a snarled mess and it took us a half hour to go 7 miles. In that time we got to know our cab driver pretty well.

I know it’s not customary to chat up the cabbie, but we are from the south. The initial 45 seconds of silence felt weird and rude and uncomfortable so our southern hospitality overrode the ways of the big city and a conversation ensued.

Because of this I can tell you all about the driver, what he loves and what bothers him, his political views and his thoughts on religion.

I can’t help it. When I get nervous I talk.

He was a young 32 year old who called both Libya and Algeria home. He was married and had a baby girl. He and his wife came to America 22 months ago to pursue their dreams of getting college degrees and making a good life for their daughter. His wife attends college classes until 2pm every day while he stays home with the baby. When she gets home he leaves and drives his cab until midnight to financially support the family. Their plans are for him to go to college after she graduates. He told us he fluently can speak Arabic, Italian, Spanish and English. He said his daughter’s 1st language will be Arabic, but that he wants her to also speak English. He was proud of his Muslim heritage.

I asked, “Do you ever have time to see your wife with that schedule?” He shook his head and said, “No, but it’s the sacrifice we make for the dream.”

To further solidify my American snob status I asked another question and immediately realized how pretentious it sounded. I said to him, “So you must really love it here compared to Libya don’t you?” He immediately responded that he misses home, their food and inexpensive healthcare. He told me I shouldn’t visit Libya right now because “the terrorist are doing crazy things and nobody understands them” but once that’s all over and things return to normal there he suggested I go visit. “It’s a beautiful country.” he said.

In that short conversation he became human.

Not Muslim or Libyan or anything else, but just mutually human.

I can sympathize with him on how it must feel to be Muslim right now in this country while the extremist of his faith are making headlines for the most horrific of reasons. It probably feels similar to how I feel when I see people in this country do inhumane things in the name of Christianity.

News Jesus always seems biased and intolerant. The news Jesus and his followers always look harsh and unlovable and condemning. The Jesus portrayed in the national news is not the same Jesus I know.  The Jesus I follow didn’t turn people away or hate anyone.  He didn’t condone anyone being heartless towards anyone else.

I don’t recognize news Jesus. Most Muslims don’t see any semblance of their faith in the footage they see of ISIS either.

If you read my bio on this website you will notice that I said I was raised by Baptist parents.

Want to know who else is Baptist? Those lunatics at Westboro Baptist Church.

You know the ones I’m talking about. They picket at military funerals and hold signs about God hating homosexuals.

Yep, them. They are Baptist.

I cringe every time they do something hateful. I really wish they didn’t call themselves Baptists and weren’t the ones scoring the PR for the rest of us, but the terrible tragic stories are always what is newsworthy. It’s one of the reasons I no longer associate myself with any religious denomination.

Right now the big debate is if or how to allow Syrian refugees to enter our country. I don’t like being political on social media or on my blog because I hate reading about that stuff by others. However, when I hear people talk about a nation of people as though they are dogs and less human than we are because a few of them are heartless, it becomes a human issue, not just a political one.

I understand the concern with keeping the bad out. I fully agree that we have to be careful of who we allow to enter our country. It would be foolish not to be cautious. What I don’t understand is the harshness by which some Americans talk about the refugees, as though they aren’t real people.

I certainly hope that if I’m ever in a situation where I need to flee to safety with my family that I’m not rejected because the people who I’m running from are scaring the people I’m running to.

If this is the mentality Americans have then why don’t we be fair and implement these rules for all large groups of people in the name of public safety?

Let’s stop allowing men to attend the movies. All the shooters at the massacres in the movie cinemas over recent years have been men. We just can’t risk it.

Let’s go ahead and shut down online dating too. Statistics show that 10% of sex offenders use online dating services. Scams, rapes and even murders have happened as results of dates set up via online dating sites. It’s too dangerous.
But we don’t do anything like that because it wouldn’t be fair to the majority who are law abiding citizens.

As the cab ride came to an end and my exhausted family filed out of the cab I looked back at him and said, “Have a good night. Happy Thanksgiving.” He responded with a smile, “You too.”

Within 24 hours of stepping off the plane in Nashville, TN, from our NYC Thanksgiving trip we were back home putting up a Christmas tree. When the kids were little they would gleefully help decorate the tree, but now as teenagers they laid on the couch watching holiday movies while I did the decorating.

Right now I’m just happy we are safe in our home, not worried about suicide bombers nearby and not feeling as though our kids are in imminent danger as they head to school tomorrow.

Praying for the refugees who cannot say the same.

So grateful I live in this great country of ours.

Giving thanks a many.