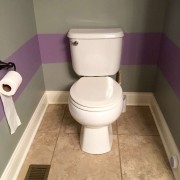 Social media has been abuzz lately over the issue of whether or not to allow transgender people to choose which public restroom to use according to the gender they identify with rather than the gender listed on their birth certificate.

No surprise, people have very strong opinions on the matter and I can appreciate both sides. Yet, once again, I’m disappointed to see how most of the discussion I’ve seen is so mean and full of hurtful, hateful words. It’s as though being decent and cordial with each other while discussing our differences in opinion is a thing of times past.

It takes self-control to have a respectful debate with someone while not demeaning them as they discuss their opposing ideas. The meanness and rudeness is a mark of narrow minded, self-centered people who don’t know a more intelligent way to converse.

This week Target announced that they will be allowing transgender individuals to use the bathroom aligned with their gender identity in all of their stores across the country. Since then, as I scroll through social media, I’ve seen incredibly mean opinions coming from both sides of the camp. Rude, dehumanizing words coming from the mouths of people I’ve always considered nice folks.

And it baffles me.

Here are my 2 cents:

First, I try at all costs to avoid public restrooms. Because they are nasty. When I do use one there is very little contact with my skin. I hover, then wash my hands, use my elbow to get the paper towel to dispense then use my back to push open the door walking out with my hands up in the air like you see a surgeon do as they enter the operating room. As far as I’m concerned Gay/Straight/Transgender germs are all the same…nasty.

Secondly, being a transgender does not equate to being a menace to society any more than a straight person can be a menace. A creep is a creep, no matter their identified gender. When I think of a scary man dressed as a woman so that he can get into the bathroom and see women adjust their bra straps in the mirrors it does freak me out. Actually, it scares me to death. However, thinking of a scary lesbian, bi-sexual or straight woman in the bathroom doing something that felt suspicious also, and equally, freaks me out. I will agree that I don’t want to share, nor do I want my kids to share a bathroom with a creeper. Sex offenders who lurk in the bathrooms scare the crap out of me for obvious reasons. This is the reason I’ve only recently began allowing my kids to go to public bathrooms without being accompanied by myself or another adult. People are crazy and rooms that include unzipping ones pants is a dreamland for people with bad intensions. When someone is being a weirdo and waving red flags it seems to matter very little to me if they have boy or girl parts in their pants.

Thirdly, the world’s view is shifting and changing. It is often challenging for Christians to live “in the world but not be of it.” Change is uncomfortable. Recent changes seem to test my faith and force me to do some soul searching to determine what is right according to my morals and beliefs. Sometimes, quite honestly, I disagree with a new law or idea that’s being circulated, but just like the mantra I use to parent my teenagers, I try to choose my battles. The main question I ask myself as a gage to a new idea is its fairness to people. I ask myself this: If this were my son or daughter being affected by this law would I think it’s fair? In this case I’d ask: If my son or daughter was a transgender person, would I agree with this new rule on bathrooms? The answer this time would be: My son and daughter are not dangerous people. They are kind and deserve to be treated kindly by others. Therefore, I’m forced to conclude that transgender people, and any human for that matter, deserve the same respect as I’d expect for my own kids.

What is the answer?

It’s not my job to judge someone, it’s my job to love them.

We are all children of God. I will always remain cautious and observant, and mostly disgusted, when unable to avoid using a public restroom. That includes being cautious of a transgender I see in the bathroom at Target……as well as the straight person I see in there as they, as strangers to me, pose equal threats. And I’ll choose to be kind to everyone, because that’s how I’d want my kids to be treated.

As a last resort. After jumping up and down until I can’t hold it another second. I’ll continue to go in quickly, do my business, sanitize every visible piece of exposed skin then make a quick exit out of there hoping I didn’t pick up any bacteria from the door handle.