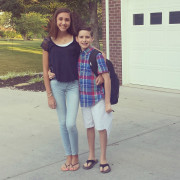 Today is the 20th anniversary of Susan Smith driving her car, with her two little boys strapped in the backseat, into a lake. She told police she was carjacked, but later confessed to the murders. She is serving a life sentence in a South Carolina prison. I remember being a young college student, who didn’t have a clue what being a mother was like, watching that story and thinking what a terrible person she must be. Today, as a mother of two, I still have the same thoughts on that judgment of her actions, but I can understand how a mother, especially one with mental instability, could snap. I wonder if Ms Smith had anyone to encourage her, to offer to bare some of her load or to get good advice from. I feel like women like her who make the headlines with their horrific parental decisions probably all share the common characteristic of loneliness. I wonder if she never told anyone of her struggles because she was afraid of being judged.

For this reason, I’ve decided to make an intentional effort to support the mom’s in my life. Full disclosure… women who give their toddlers Mountain Dew in sippy cups, smoke cigarettes in cars with their kids in the backseat or do anything on a list of things one can do that would cause social workers and/or the po-po to have a legit reason to show up at their door are exempt from my goal of becoming a non-judgmental mother of other mothers. I feel like those mom’s probably need advice from someone a couple pay grades above me whom would be able to give better counsel. Everyone else not included in that previous sentence should know that they have my support. I promise that I will try to not compare my parenting style to yours in a negative way. I will do my best to not say anything to you to deflate you as a mother. I’d ask you do the same for me. Even when I do something like make my kid finish their sandwich only to discover the bread was molded or when I let my 12 year old watch a PG-13 movie. Let’s work on supporting and building each other up. This could be the beginning of a great thing.

Whether you are a stay-at-home mom or work-a-job-that-mails-you-a-W2 mom, you have a tough job. I’ve had both of those positions and they both come with their own unique set of challenges. I was a stay-at-home mom to two of the smartest, most adorable chubby cheeked babies on the planet. I had that job for all of 18 months before I dang near lost my mind and needed a job out of the house. I went back to work and loved most every minute of it until those chubby cheeked babies turned into pre-teen middle schoolers and my attention was needed back home. Now, after several years, I’m back to doing the domestic engineer gig again. My have the times changed. The last time I stayed at home I was changing diapers and listening to Toy Story 2 on repeat during the course of the day until I cried. This go around I’m more of an unpaid taxi cab driver enduring kid’s hormonal craziness. One thing that didn’t change is the need to feel like I’m succeeding. The criticisms I get as a stay at home mom hurt as much as the ones I got for working.

I’m blessed with several great friends who are also mothers. I can call them and vent or ask for advice, and know that I won’t be judged by them. Whether you work outside the home or inside the home, only feed your kids homemade organic dinners or slide on two wheels through a drive thru window on your way home from the office you’re doing your best. Being a mother is a hard job no matter how you slice it. I’m so grateful for my judgment free mom friends. Like the one who told me, “It’s okay Amanda. You didn’t know. He didn’t die. It’s fine.” When I called her crying because my fussy son (he was 5 years old at the time) who I’d been telling to toughen up about his sore thumb for a whole week had actually broken his wrist and was now in a cast.

I think my favorite SNL alum says it best, “Obviously, as an adult I realize this girl-on-girl sabotage is the third worst kind of female behavior, right behind saying ‘like’ all the time and leaving your baby in a dumpster.”