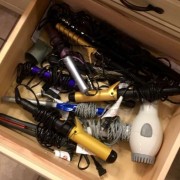 This morning was my bi-monthly hair appointment.

I look forward to this appointment because no matter how hard I try my hair never looks more fabulous than when I’m walking away from my hair stylists chair. When I leave from there I’m able to give the illusion to others that I got up early and fixed my hair, applied some lip gloss and ran errands looking like a boss.

Another thing I love about my hair appointment is that when I go into her little salon with teal walls, a pretty little chandelier and a girly white fur chair I get to sit down for an hour and a half and have girl talk.

Leslie is a young 30 year old blonde who is married to the sweetest guy. She hasn’t started a family yet so I hear stories about her adventures with raising a puppy and about the cruises they go on. My talk is usually about my kids or my lack of hair styling abilities.

Today we were talking about our husbands.

It started out being lovely words exchanged from two doting wives about their handsome husbands. However, one thing led to another and the next thing I know I was saying to her that “there are days in my marriage when I’d like to dig a hole in my back yard and bury him in it.”

Yes, I actually said that. I would never actually hurt him. It just feels good to say it sometimes. I said it playfully, but it was an inside thought that slipped out of my mouth before I could catch it and she knew it.

To my surprise, Leslie said, “Sometimes I daydream about smothering my husband with a pillow in his sleep. Like I think that would really make me feel better on certain days.”

We both burst into laughter at the shock at what was just said.

She’s right too. My husband is the kind of guy who sends ‘just because’ flowers all the time. He still uses pickup lines on me when asking me to go out on a date with him, which I find adorable. He works hard for our family and is the best father any kid could dream of having. Leslie has shared sweet stories of the romantic things her husband has done. We are lucky girls.

None the less, sometimes I think about burying him in the back yard.

I wouldn’t be ugly about it. I’d get him a lovely headstone and make sure to change out the flowers ever so often.

Today takes the cake for my favorite conversation that has ever happened while sitting in her chair with a head full of foils.

She said that she was actually relieved to hear that she’s not alone with feeling like that. She said she feels bad at times about how she gets so furious with him, but hearing me say that made her feel a little better.

She said, “I’m so happy that other women who are sane and married to awesome men also sometimes want to kill them.”

What she said next had me grabbing for my phone to make notes about the conversation before I forgot exactly what she said.

She said she thinks married couples need “peer counseling.” Meaning, how great would it be if we were able to be open and authentic with each other about our marriages. I love hearing about romantic things my friend’s husbands do for them or seeing their gorgeous family photos of their whimsical holiday festivities. However, when I only see the good stuff, their highlight reel, I begin thinking I don’t measure up.

Sometimes I wonder if my thoughts and feelings are crazy. It casts a dark cloud of doubt over our relationship because it makes me feel as though our marriage is not as great as my friend’s seemingly perfect marriages.

When a slip of tongue about wanting to kill him during stressful times in our lives is reciprocated by an “I daydream about smothering my husband in his sleep.” Oddly enough it makes me suddenly feel normal. I feel validated. I feel less crazy. I can even laugh about it.

Peer Marriage Counseling. She may be on to something.

Chrissy Teigen, the model married to John Legend, recently tweeted, “I always have a note in my pocket that says, “John did it” just in case I’m murdered because I don’t want him to remarry #truelove #tips.”

This beautiful lady is talking about framing her husband for murder. And it’s hilarious. Why? Because we can relate to that sentiment.

We deeply love our husbands, but don’t always feel in love. We have to choose love. Make a conscious decision to love even when the feeling isn’t there. It’s the beauty of marriage. Pop culture tells us that we should always have butterflies in our stomach when our significant other walks into a room. How we should always feel dreamy eyed and smitten. It’s just not realistic to feel like this 100% of the time once you’re knee deep in a love that is an in-for-the-long-haul type of love like marriage.

Sometimes I feel in love. Sometimes I have little hearts floating around my head and I swoon over him.

Sometimes I don’t feel the love and briefly pondering his demise kind of feels more appropriate.

It goes both ways. He’s in the same boat. He would tell you that I’m not always a pleasure to be around. He maybe would even confess to visions of poisoning my breakfast, but he chooses me.

After my peer marriage counseling session that also happened to coincide with a fresh blow out and style, I’m reminded about how normal I am. How great and normal my husband is. How a little bit of real conversation builds trust in friendships and is encouraging. It feels good to be able to laugh about the stress in our lives.

We both agreed that we are indeed married to awesome fellas, even if we do happen to daydream about killing them on occasion. 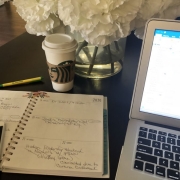