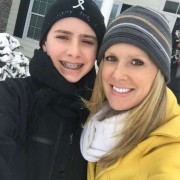 My kids are home from school today because it snowed.

Here in Kentucky it doesn’t require much snow fall to cancel school. They have cancelled school in the past when snow was predicted, before a single flake fell. I’m not complaining.  I’d rather not have to get out in the mess if I don’t have to, but my New York friends like to make fun of how much of a pansy Kentuckians are in regard to snowfall.  I’m alright with that too.

I have a 13 year old in middle school and a 14 year old in high school. This morning they woke up to the news that school had been cancelled, but for the first time since they were able to walk upright, they didn’t immediately run to the front door, sling it wide open and begin incessantly asking when they could go play in the snow.

In fact, they both slept until 10am then when they woke just asked me casually about what was for breakfast.

The only exciting thing that happened this morning was when my son told me I had “another moment” in my sleep. He said he came to my bedroom late last night to tell me that school had been cancelled. When he nudged me awake he said I came up swinging my fists at him while yelling for help. I called bullshit until my husband confirmed that it did indeed happen. I have absolutely zero memory of any of it. My son said he just decided to let me find out on my own about the school thing and left my room quickly before he got punched. I’m so glad I didn’t actually land any of those punches that I allegedly threw and also relieved to see that he thought it was hilarious as he told me about it.

(For some further background on my bizarreness when I sleep take a look back at a blog from several months ago titled Freak in the Sheets at https://www.amandawaggener.net/freak-in-the-sheets/. Be thankful you don’t have to share a bed with me. Mad props to my husband who has survived doing so for many years.)

So, aside from the near assault on my child, it was a quiet morning.

Me: “You want to go play in the snow today?”
My daughter: (laughter)

We had breakfast, tidied up the house a bit, hung out in our pajamas for the better part of the day and made plans on how we were going to spend our snow day…..which did not include playing in the snow.

How did this happen?

IT’S A NO SCHOOL SNOW DAY!!! Why are my kids too big to want to play in the snow?

I retreated to my bedroom and looked at Facebook. It was full of pictures my friends had posted of their littles in the snow. Pity party ensued. It made me feel sad.  Last year my kids acted like kids, but somehow there was a transformation and this year they are acting like teenagers!

They are growing up. I won’t get to take cute pics of them bundled up so tightly that they can barely move their arms while they throw snow balls at each other. I won’t get to clean up puddles of water off the floor all day long while begging them to please put all their wet snow gear in the laundry room. I won’t get to make them hot chocolate and watch them snuggle up together on the couch under blankets, watching cartoons while they warm up. Their pink little cheeks that are so cold they hurt and the frozen snot on their top lips is a thing of the past it appears.

They grew up some more on this snow day.

I decided to go to my bedroom, get under a blanket and write. In the peace and quiet. And that’s when it hit me that this ain’t so bad.

I wasted a good chunk of my day grieving the loss of one of the chapters of their childhood ending instead of enjoying the perks and being excited about what this new chapter has to offer.

There will be a day soon enough when a no school snow day won’t mean anything to me because they will be grown and out of my house. I’ll look back at these new teen years that we have just started and miss them. I’ll miss how they woke up every morning in my house and needed me to help them get their breakfast. I’ll miss how they stayed inside with me all day driving me crazy with their loud music and way-too-long showers. I’ll miss not knowing all the details and being right in the middle of what is happening in their lives.  I’ll miss how we spent these days working on the upcoming science fair project that’s due soon. I’ll actually miss all this hustle bustle business that creates so much energy and makes the house feel so alive.

I don’t want to be so sad and focused on what has passed that I miss out on what is here in front of me right now.

It’s actually pretty great that I don’t have to go outside and freeze my butt off, then wonder if my fingers may actually be frost bit from giving one of them my gloves because theirs got wet.

This teenage chapter of life is pretty awesome, at least on snow days, at least in regard to my body temperature.
Maybe, but please remind me of this during my next breakdown. As they age, so do I. They say the first thing to go is the mind…..and maybe a nose if you wake me up at the wrong moment while I’m sleeping.

Loving My Husband To Death
Scroll to top